An 8-year-old male neutered Golden retriever and poodle mix presented to the neurology service on an emergent basis for difficulty walking, primarily in his left pelvic limb. The patient’s history included a few months of lameness that originally began in the right pelvic limb and included exercise intolerance during walks. He had been evaluated by his primary veterinarian without significant findings; carprofen and a joint supplement were prescribed, and he improved mildly. However, shortly after, his lameness returned.

On the day of presentation, he was seen dragging his left back leg while trying to climb stairs, but also holding the limb up off the ground. There was no history of other medical issues.

On initial neurologic exam, the patient was ambulatory paraparetic with a short/choppy form of paraparesis and was intermittently holding up the left pelvic limb. He had a crouched posture in the hind end with flexion of the lower back and a tendency to sit down frequently when gaiting. His postural reactions were normal. He had poor patellar, gastrocnemius and withdrawal reflexes in both pelvic limbs. He was not apparently painful on vertebral palpation. His localization was most consistent with an L4-S1 myelopathy/neuropathy or local neuromuscular condition.

The patient’s physical examination was only remarkable for poor femoral pulse quality on palpation and no palpable distal pulses in his pelvic limbs. He had no evidence of orthopedic abnormalities on exam. 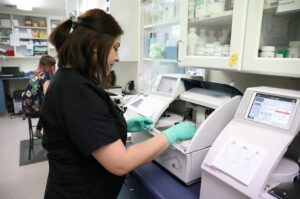 Due to suspicion for aortic thrombus, abdominal ultrasound was performed next, which identified a large, caudal aortic thrombus extending from the level of the apex of the urinary bladder caudally through the bifurcation into the left femoral artery. The thrombus occluded approximately 90% of the diameter of the caudal aorta with minimal appreciable Doppler blood flow.

Additional diagnostics were performed to search for an inciting cause of the thrombus and included a complete blood count, serum chemistry, urinalysis with protein:creatinine quantification, thyroid panel and a 4Dx SNAP test. Pertinent findings included 3+ urine protein with a urine specific gravity of 1.030, a urine protein:creatinine of 1.5 (mild elevation), and 4DX SNAP positive for Lyme antibodies. Significant elevations in creatinine kinase (CK) and aspartate aminotransferase (AST) were also identified on chemistry, which were considered to be secondary to skeletal muscle damage from tissue hypoxia in the pelvic limbs due to the aortic thrombus. The patient was diagnosed with suspected protein-losing nephropathy with possible contribution from Lyme disease, though Lyme nephritis was considered less likely given that the patient did not display the typical severity of that condition.

Initial treatment included anticoagulation with cloprigrel (Plavix) 75mg  (3.1mg/kg) PO q24h and rivaroxaban 15mg (0.6mg/kg) PO q24h, and management of underlying proteinuria/possible Lyme disease with benazepril 10mg (0.4mg/kg) PO q24h and doxycycline 150mg (6.3mg/kg) PO q12h x 30 days. The patient was started on a prescription low-protein diet appropriate for kidney disease and was referred for continued management through our internal medicine service. Consultation regarding anticoagulant therapy was performed with a criticalist. Oscar was given a fair prognosis at the time of discharge. 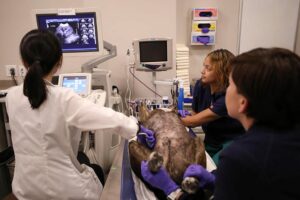 Approximately two weeks later, Oscar was re-evaluated by the internal medicine service. His ambulation had improved, and he was no longer lame in either pelvic limb. He was reported to have a mildly picky appetite for the prescription diet, but was otherwise doing well.

On repeat ultrasound, there was improvement in the diameter of the aortic thrombus that now occupied approximately 60% of the diameter of the aorta with corresponding improvement in blood flow to the hind legs. Femoral pulses were still palpated as weak at the time of exam. Thromboprophylaxis therapy and management of his glomerular nephritis was continued as previous. Recommended recheck schedule included repeat ultrasound, systemic blood pressure, and bloodwork, including repeat urine protein:creatinine testing in three months.

Aortic thrombus is a condition in dogs that most frequently includes in situ blood clot formation in the caudal aorta. This condition differs from that in cats as structural heart disease such as cardiomyopathy is uncommonly reported in dogs with aortic thrombi and clinical signs of progressive or intermittent pelvic limb lameness; ataxia, or weakness are much more common in comparison to the sudden onset of paralysis seen in cats. The major difference appears to be the tendency for dogs to form an aortic thrombus in situ versus the tendency in cats to embolize a thrombus to the aorta that is formed elsewhere in the body, usually the heart. While cats have an overwhelming tendency to be diagnosed with underlying cardiomyopathy, dogs are more likely to have a systemic illness leading to hypercoagulability.

It is reported that approximately 50-60% of dogs with this condition will survive, but this likely has to do in large part with the amount of pelvic limb function that is present at the time of diagnosis. Fortunately, our patient still had the ability to walk at the time of diagnosis and did not appear to be significantly painful, both of which supported the decision to continue with therapy. In dogs that are painful and non-ambulatory from this condition, the decision may need to be guided by quality of life given that functional improvement may be slow and is not guaranteed.

Currently, the strongest recommendation appears to be to administer both anti-coagulant and anti-platelet therapy, though exact information on the difference in potential outcome with various therapies cannot be determined from the various reports that have been published on this condition. Since rivaroxaban, an anticoagulant, is reported to be well tolerated in dogs as is cloprigrel, an anti-platelet drug, it was decided to place our patient on both therapies. Additionally, his suspected underlying cause, protein-losing kidney disease, was addressed.

This case illustrates a condition that is probably underdiagnosed in dogs given the lack of awareness of many veterinarians about the difference in presentation of aortic thrombi in dogs compared to the more common aortic thromboemboli in cats. Early diagnosis is likely to improve outcome in these patients, especially when an underlying cause can be identified and treated. Screening for asymptomatic, chronic disease conditions in dogs including protein-losing kidney disease and systemic hypertension may also help reduce the incidence of this condition or other vascular disease.

Is the Patient Really Vomiting?