Playing fetch? Think twice before throwing that stick for Fido.

While it is beneficial and fun to play fetch with your dog, there are risks. Here’s what you should know about stick dangers.

From stick-splinters and scrapes in a dog’s mouth to life-threatening injuries and infections, there are many dog injuries that can occur from sticks. While not all park fetches will result in a trip to the animal emergency hospital, veterinary surgeons at BluePearl Specialty and Emergency Pet Hospital say it is common to see dogs with injuries related to sticks – especially during the warmer months when owners and their pups head outside for some exercise and fun.

Most dog owners see no harm in giving their pets sticks during games of fetch or along hikes or walks. It is important for these owners to know that sticks can scrape a dog’s throat, and while this may just cause minor wounds, some dogs can suffer life threatening injuries like a laceration to the vital structures of the neck or stomach, as well as a bacterial infection,” remarked Dr. Erin McGowan, Critical Care Specialist at BluePearl in Waltham, MA. “While it is beneficial and fun to play fetch with your dog, there are real risks. If you and your dog enjoy this type of activity, I recommend using safer alternatives such as rubber sticks, balls, and frisbees.”

Dogs with stick injuries can show signs immediately or weeks to months following the initial injury. Signs of dog stick ingestion and/or injury may include blood-tinged saliva, pain, vomiting, reluctance to eat or drink, lethargy, swelling of the face and neck, and/or bloody stool (indicative of a pierced organ).

Not all stick injuries occur from a friendly game of fetch. Dogs commonly chew on sticks out of boredom or for puppy teething relief. Take for instance Wall-E (aka WAWA), a 15-month Rottweiler puppy, whose owners had no clue he had ingested a stick until an X-Ray taken at BluePearl in Waltham, MA, revealed a long object lodged in his stomach.

The case of Wall-E 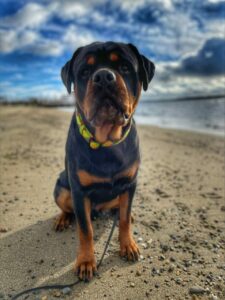 Wall-E began vomiting late one Monday afternoon in April. Although he was otherwise energetic and happy, his owner, Rachael E. Sprague, Practice Manager at BluePearl in Waltham, reached out to her colleague, Dr. Erin McGowan, to make sure nothing was wrong. Without physically examining Wall-E, Dr. McGowan recommended letting his belly rest and after a few hours, feeding him a small snack. At about 7 pm, Rachael gave him a snack, which he enjoyed without vomiting. Around 2 am the following morning, the vomiting returned so she brought Wall-E into the hospital for an exam.

Mr. Wall-E came to see us through the ER after he had been vomiting off and on all weekend. I’ve had the pleasure of working with Wall-E in the past for vomiting as he is your classic silly puppy who loves to put just about everything in his mouth,” explained Dr. McGowan. “His physical examination was extremely normal; he was happily wiggling his butt and had a comfortable abdomen and no fever. To be cautious and thorough, and knowing his propensity to snack on things he shouldn’t, we took some X-Rays to make sure we were not missing anything.”

On an X-Ray, BluePearl radiologist, Dr. Leslie Schwarz, noticed a long, 10-inch cylindrical object with aggravated tissue outside of his stomach. To collect additional information on the cause of Wall-E’s discomfort, the radiology team then performed an abdominal ultrasound.

On ultrasound, Dr. Schwarz found an area of fat near his stomach that was enlarged, swollen, and had a small amount of gas within it. Since there should never be gas within the abdomen, we determined that the safest thing for him would be for a surgical explore to fully evaluate that region and remove the foreign body from his stomach,” said Dr. McGowan. “Wall-E was admitted to the hospital, and immediately started on fluids and broad-spectrum antibiotics.”

Dr. Arango performed an abdominal explore and to all of our amazement found that a large, 10-inch stick with a 35-degree bend had perforated a hole through his stomach and the fat that supports and heals the abdominal organs had sealed off the area. Upon removal of the abnormal fat from around the hole, the team also found splinters, some of Wall-E’s fur, and tons of grit and grime,” said Dr. McGowan. “The hole was repaired, and his abdomen was copiously flushed to help decrease any bacteria in the abdomen. Wall-E then spent the next few days in the ICU with us for aggressive pain management, antibiotic, and nutritional support.”

Dr. Jonathan Arango, Dr. Jessica Byrne, and the rest of the surgery team did what they do best by moving quickly and efficiently to get Wall-E into and through surgery. At the time of surgery, it was also discovered that Wall-E was septic.

Sepsis is an infection of the body that results in severe inflammation. Dogs who do not undergo treatment may have multi-organ failure including the kidneys, lungs, and/or liver. Generally, sepsis occurs when a severe infection is not timely or adequately treated. Ruptured intestines (from intestinal cancer or a foreign body obstruction such as a stick) is one of the many causes of sepsis, and septic shock. Typically, treatment of sepsis requires IV fluids, antibiotics, cardiovascular support, and surgery. Recovery depends on the severity of the infection and if the dog has any underlying conditions. Sadly, most septic shock cases have a poor (often grave) prognosis.

Throughout it all, Dr. McGowan says Wall-E’s goofy puppy antics never stopped, and he quickly woke up from anesthesia like nothing had happened.

He was such a trooper, giving kisses and snuggles to everyone and anyone throughout everything,” said Dr. McGowan. “Because we worked as a team, we found it quickly – before Wall-E’s body even really knew it was there. If we had waited a few more hours or days, Wall-E would have gotten much sicker, and it would have been a tougher road to recovery. I like to think he learned his lesson, but I have no doubt he wouldn’t hesitate to snag another stick in the future. We see stick related injuries all the time through the ER. Sticks are dangerous to play with and anytime I see an owner throwing a stick for a dog to chase I cringe a little.” 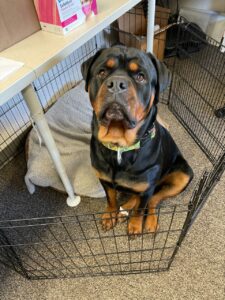 Rachael is thankful for the quick, thorough, and collaborative care Wall-E received from the team at BluePearl in Waltham. Today, she is urging other owners to seek expert medical advice even when outward symptoms seem insignificant as well as to secure pet insurance coverage long before a pet emergency happens.

Thankfully, Wall-E was on the mend and discharged shortly after surgery,” said Rachael. “Pet insurance took the budget conversation out of the equation for me as an owner, which is so important in life-or-death pet emergencies. If we had only treated his outward symptoms with supportive care and saw how the next 24 hours went and did not perform radiographs, we never would have found the foreign body and there is a great chance Wall-E would not be here. Even though I was scared, I never questioned the plan for care. I went through the last few days knowing that no matter the outcome this team had Wall-E’s physical and emotional needs as everyone’s top priority.”