Gastroprotectants are one of the most commonly prescribed medications for our patients and are most commonly used in those with a history of gastrointestinal illness (vomiting, regurgitation, suspected ulceration, etc.). 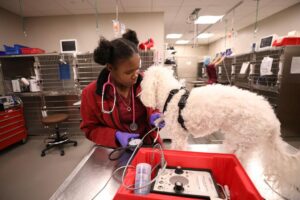 There are a number of medications available that can be separated based on their mechanism of action, and in recent years, there have been many studies evaluating the efficacy of various drugs.

Fortunately, the Journal of Veterinary Internal Medicine has published their consensus statement on the rational use of gastroprotectants in dogs and cats (Marks SL et al., “ACVIM consensus statement: Support for rational administration of gastrointestinal protectants to dogs and cats.” 2018; 32: 1823-1840.). Below is a summary of some of the highlights from this document.

Which medications are the most effective in altering gastric pHt?

(e.g. aluminum hydroxide, calcium carbonate, etc.) are medications that utilize inorganic, insoluble salts that function via binding to bile acids, stimulating local prostaglandin synthesis, and decrease pepsin activity. There is insufficient evidence to recommend antacids for the treatment of gastroduodenal ulceration or reflux in dogs and cats.

lesions in racing sled dogs. While famotidine (1 mg/kg q12h) increases intragastric pH in healthy colony cats, it is inferior to omeprazole. There is a lack of benefit for the administration of once-daily H2RAs in dogs and cats to treat gastrointestinal ulceration and esophagitis and they are inferior to proton-pump inhibitors in dogs and cats.

(e.g. omeprazole) antagonize the final common pathway of acid production in the
parietal cell. In healthy dogs and cats, PPIs consistently perform better than H2RAs for increasing intragastric pH and should be administered twice daily to approach pH goals established for the treatment of acid-related disorders in people. Additionally, it should be considered to gradually taper these medications if administered for &gt; 4 weeks to avoid rebound gastric acid hypersecretion.

In which disease conditions are gastroprotectants indicated?

PPIs are superior to H2RAs and sucralfate for most causes of gastrointestinal ulceration in people and should be considered the standard of care for the medical treatment in dogs and cats. There is weak to no evidence to support the use of gastroprotectants in dogs and cats with nonerosive gastritis, hepatic disease, IRIS stage 1-3 renal disease, pancreatitis, thrombocytopenia-induced bleeding, and glucocorticoid-associated ulceration/erosion. There is evidence of support for the use of acid-suppressing agents for the treatment of esophagitis secondary to reflux via increasing the pH of the reflux, not the overall volume of reflux.

What about coating agents?

Sucralfate forms stable complexes with protein in damaged mucosa where there is a high concentration of protein. It also buffers intraluminal pH via interfering with pepsin and stimulates prostaglandin production in the gastric epithelium. There is weak evidence to support the use of sucralfate for prevention or treatment of esophageal injury, and there is no evidence for the concurrent use with either H2RAs or PPIs.

Gastroprotective medications can be an effective treatment for dogs and cats if used appropriately and can significantly reduce morbidity associated with several gastrointestinal disorders. Further information is required to provide additional recommendations for chronic management of these conditions. Please refer to the ACVIM Consensus Statement for specific and further details mentioned in this article.

Diabetes in Dogs and Cats