Cats with feline cerebellar hypoplasia can still have happy lives. 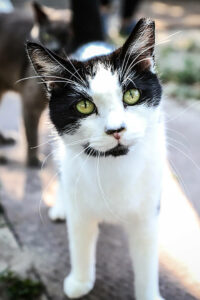 Cats are well known for their grace and balance, so it may be surprising to learn that there are some felines who have unsteady and wobbly gaits. These cats likely have cerebellar hypoplasia (CH). Currently, there are still some unknowns surrounding this disease, which leads to far too many CH cats being euthanized before getting a proper diagnosis, making it more difficult for the awareness about this condition to grow.

Cerebellar Hypoplasia, also known as CH and wobbly cat syndrome, is a neurological disorder that causes sudden jerky movements, uncoordinated motion and loss of balance. In a CH cat, the brain does not develop properly. This can happen when the pregnant mother has feline panleukopenia virus (feline distemper) and passes the virus along to her unborn offspring. CH is neither contagious nor painful.

There are three levels of CH severity: mild, moderate and severe.

Mild level CH cats require little to no additional care. They may have subtle head tremors when nervous or scared, lose balance occasionally, have the wide “tent” or “A”-like gait but can still do things a normal cat does, such as climb, jump, run and walk.

Moderate CH cats, on the other hand, may have more noticeable head tremors when nervous or afraid or in new situations, have more frequent bouts of falling during walking or standing, have a noticeably exaggerated cerebellar hypoplasia stance and walk, and will often climb using their nails as leverage, instead of jumping.

Cats who are diagnosed as severe will need to have a lot of extra special-needs care. They have almost constant head tremors, cannot stand or walk but a few steps without falling over – even with the splayed “tent”-like stance; most cannot use a litter box, and some need help with eating and drinking. Their living conditions will likely need to be altered for their safety, such as putting non-slip rugs down for ease of walking or to help them pull themselves along with their nails.

The CH diagnosis is typically based on clinical signs. An MRI may show a smaller than normal cerebellum. There is no cure or treatment for CH because it is a lack of development of the brain while the kitten is growing. CH will not affect the lifespan or quality of life of your client’s cat. Clients can still safely spay and/or neuter cats with CH.

Squirt has severe CH. I have had the pleasure of being Squirt’s owner since he was about 3 weeks old, and he turned 5 years old last November. I had never heard of cerebellar hypoplasia before having this tiny, totally dependent, bobbing black blob thrust into my life, changing it forever.

For the first 6 months, Squirt went with me everywhere; he was known as the “Bobble Head Kitty” at pretty much every drive-thru in the Jacksonville, Fla. area. We had clients that came into the shelter where I worked just to see and visit with him. When people asked what was wrong with him, the easiest way to start the conversation was to say that he had the cat version of cerebral palsy and go from there.

Squirt spent so much of his life sideways on the floor that my husband decided to build him a wheelchair to help him with his balance and learning to walk. We also put socks on his feet to help with the grip. He really was amazing to watch.

Squirt was learning something new almost every day. We celebrated everything, from the small things he learned, like cleaning himself, to the bigger things, like taking a few steps all on his own without the chair. We learned that we felt badly for him, but he didn’t feel any different from the other cats in the house. Squirt was happy. He got where he wanted to go, and he got what he wanted to get. He was the best “foster daddy cat” ever. His tail never stops flailing back and forth and the wee kittens always think it’s a toy to play with.

Squirt is so patient and understanding with them, and they flock to him and snuggle up for their naps after he wears them out. A lot of people would think twice about including a “handicapped pet” in their home, but after my experiences with Squirt, I wouldn’t. Squirt’s cuddles and nose bumps are extra special.

Although cerebellar hypoplasia might still be unknown to some, awareness of this condition is improving. We need more community “advo-cats” like Squirt that will help get the word out about CH. The more we can increase awareness, the more CH cats we can save and the more they can change human lives and opinions. Even though they might not be able to act like “normal” cats, CH cats can and do still love and play like “normal” cats.