The kidneys perform many vital functions, including the removal of various toxins from the body. These toxins are waste products from normal cell functions.

When kidneys fail, they can no longer remove these toxins. “Acute” renal (kidney) failure means that the problem developed relatively quickly.

Many things can cause acute kidney failure. Certain poisons are well known for their ability to damage the kidney. These poisons include:

Severe infections in the kidney from bacteria can cause sudden kidney failure. Although kidney infections can occur spontaneously, usually there is a preexisting condition that reduces an animal’s ability to fight infection easily – such as kidney stones, partial urine blockage or chronic kidney disease.

Leptospirosis is a bacterial infection (Leptospira spp.) that can cause acute kidney failure in dogs, but very rarely in cats. Dogs get leptospirosis from urine or water contaminated by infected animals (deer, cattle, rats, raccoons, mice or other dogs).

Anything that decreases blood flow through the kidney can cause kidney failure. This includes dehydration from any cause (such as severe vomiting and diarrhea). Heatstroke or other disorders causing massive damage to body tissues, such as bee stings or snakebites, can also lead to kidney failure.

Dogs or cats with acute kidney failure may have a variety of clinical signs.

Symptoms of kidney failure include:

Blood and urine tests are used to diagnose acute kidney failure and to assess the severity of disease. Other tests, such as radiographs (X-rays), ultrasound and special blood tests are usually necessary to help determine what might have caused the kidney failure. Sometimes a biopsy of the kidney is recommended.

However, the cause of kidney failure is not always easily discovered and may never be determined.

Fluid retention may occur if urine production is less than IV fluid input. This may manifest itself as increased body weight, belly bloating, swollen legs, or shortness of breath if fluid builds up in the lungs.

Not all animals with acute kidney failure will respond to IV fluids. Advanced therapies such as peritoneal dialysis or hemodialysis may be necessary. Signs that indicate these therapies should be considered include:

Peritoneal dialysis involves placing a tube directly into the belly cavity then pushing fluid into the belly, which is later drained out.

This flushes out many toxins the kidneys are failing to remove. Initially, this procedure requires a doctor or nurse 24 hours a day to keep flushing the fluid in and out. Unfortunately, even in the best of circumstances, complications such as infection around the tube and clogging of the tube are frequent after only a few days. 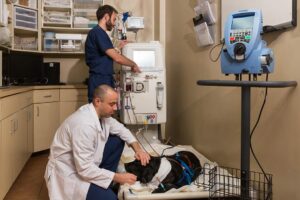 Hemodialysis involves putting a large IV catheter in a vein and using the catheter to remove a quantity of blood, which is then sent through a machine that cleans the blood. Hemodialysis is effective, but only a handful of veterinary hospitals are equipped to do hemodialysis. Both peritoneal dialysis and hemodialysis are very expensive treatment options.

Despite all the advances in the treatment of acute kidney failure, it remains a serious and often fatal disease. About 60% of dogs and cats with this disease either die or are humanely euthanized because of failure to respond to supportive care.

Dialysis is usually reserved for those patients in whom medical treatment has failed, and the chance of death without dialysis is almost 100%. In those patients, 50% may recover with dialysis, depending on the underlying cause of kidney failure.

Even in patients that recover from acute kidney failure, the recovery may be incomplete, leaving the patient with chronic kidney disease that will require life-long ongoing care.

For more information on this subject, speak with the veterinarian that’s treating your pet.