Skip to the content
Join the BluePearl Family! We're hiring.

More and more pet hospitals are offering hemodialysis services. We were one of the first.

A treatment option you may not know about.

Hemodialysis is the process of exchanging water, solutes and toxins across a semipermeable membrane (artificial kidney). Over the last decade the number of universities and private practices offering hemodialysis has rapidly expanded. Despite this, hemodialysis still remains unavailable to most veterinary patients. BluePearl is proud to be included in the group of private practices to offer hemodialysis in Washington, New York, New Jersey and most recently in Tennessee. Take a look at a hemodialysis patient at our BluePearl Pet Hospital in Paramus. 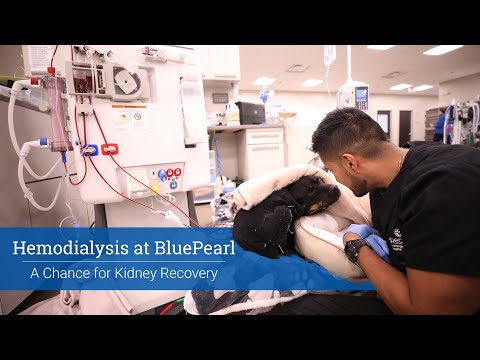 Hemodialysis is the process of exchanging water, solutes and toxins across a semipermeable membrane (artificial kidney).

This exchange allows removal of waste products and toxins from the blood and restoration of the patient’s electrolyte and acid-base derangements from the dialyzate water. During dialysis, excess water, select solutes and toxins (both endogenous and exogenous) pass through the small pores in the artificial kidney, but larger solutes, proteins and cells are retained in the patient due to the small size of the pores in the artificial kidney.

The equipment used for dialysis in veterinary patients is the same as that used for humans; however, the techniques and protocols have been adapted to account for the variable and small size of veterinary patients. The delivery of hemodialysis is very technical and requires not only specialized equipment but a specially trained and dedicated staff.

In veterinary medicine, by far acute kidney injury is the primary indication for hemodialysis. Other reasons include hyperkalemia, fluid overload, and oliguria/anuria and to provide an excretory boost with chronic kidney failure. While the reasons are easy to define, the exact timing of initiation of dialysis for acute kidney injury is controversial; however, it is known that initiation of dialysis early in the process leads to far superior outcomes, and dialysis should not be considered a salvage procedure.

There is a 50% survival to discharge on average of dogs and cats treated for acute kidney injury/failure with hemodialysis in the absence of underlying chronic disease. The prognosis for recovery from acute kidney injury/uremia however depends on etiology, extent of renal damage, and co-morbid conditions. Survival is variable depending on etiology in particular, with infectious cause having about 60%, toxins 20%, and leptospirosis 85% survival, respectively.

With decline in glomerular filtration, potassium rapidly accumulates in the body as this is the primary mechanism of excretion. Levels can rapidly reach life-threatening concentrations with an acute drop in GFR. Short-term management can be accomplished pharmacologically to cause transcellular shifts (insulin with dextrose, sodium bicarbonate) or to restore membrane gradients (IV calcium); but, this only results in a transient and modest correction of serum potassium levels since the body’s potassium burden remains unchanged.

Hemodialysis effectively removes potassium from the body decreasing whole body potassium concentrations. The decreased potassium level is almost instantaneous within the cardiac circulation and is cardioprotective within minutes of starting dialysis. The effect is also longer lasting as hemodialysis can reduce whole body potassium burdens for 48 hours or more and the process can be repeated indefinitely.

Consideration of hemodialysis at the onset of oliguria can prevent this completion and allow for continued parenteral medication and nutrition as needed since fluid balance can be maintained with the removal of free water. Prevention of overhydration with recurrent hemodialysis sessions can prevent overhydration and thus increases the odds of survival.

As previously mentioned, fluid overload has been shown to increase the risk of mortality. Estimates from UC Davis are that over 70%-80% of patients presented for hemodialysis are overhydrated. Overhydration in the face of uremia is one of the major negative prognostic indicators for survival in both human and veterinary patients. Hemodialysis can help prevent and can treat overhydration with the removal of excess body water.

Toxins/chemicals and medications that are not tightly protein bound and are small enough to fit through the artificial kidney membrane pores can effectively and quickly be removed with hemodialysis. Additional benefits with hemodialysis are the removal of both parent compounds and metabolites as well as the removal of substances that have already been absorbed from the gut.

Ethylene glycol is the most common intoxication in cats and dogs. Clinical signs can develop within minutes and can progress to anuric/oliguric renal failure within 12-24 hours if left untreated. Traditional therapy with alcohol or 4-methoperazole should be instituted immediately; however, if hemodialysis therapy is instituted within 5-6 hours of ingestion, a single session can not only remove the parent compound but the metabolites as well and is the treatment of choice.

Some other dialyzable toxins/medications include:

In addition, there have been 2 case reports of baclofen intoxication in dogs that were successfully dialyzed using hemodialysis alone and in combination with hemoperfusion. 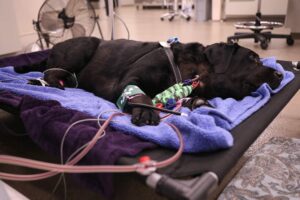 medicine than veterinary medicine. It can be effective to provide an excretory boost in veterinary patients but due to the cost and limited availability is less commonly used in chronic cases compared to the above-mentioned reasons.

The goal of hemodialysis in chronic kidney failure patients is one of palliation and maintenance of a quality of life. Dialysis is used in conjunction with traditional medical therapy. Patients that tend to benefit the most are those of International Renal Interest Society stage IV chronic kidney disease free of comorbid conditions. Prognostic indicators for the benefit of hemodialysis in veterinary patients is unknown and risks/benefits need to be considered on a case-by-case basis.

Hemodialysis is safe and effective in the management of life-threatening acute kidney injury, hyperkalemia, oliguria, fluid overload and the removal of select toxins/medications.

With acute kidney injury, the most common use of hemodialysis in veterinary patients, hemodialysis extends the window of opportunity for renal repair indefinitely. Clients need to be aware that dialysis does not fix the kidney injury; it only provides the damaged kidney time to repair itself. It is often this lack of time and the resultant clinical decline of our veterinary patients that unfortunately results in euthanasia when hemodialysis is a viable alternative if available.

It is difficult to determine how long therapy for acute kidney injury must continue but clients should be emotionally and financially prepared for 2-4 weeks on average; it can, however, take months. The prognosis and duration of therapy is very dependent on the cause of the acute renal injury and the degree of renal damage, which is most often unknown, as well as comorbid conditions.

While the reasons and benefits of hemodialysis are well established, the exact timing of initiation of dialysis is not known. Initiation of hemodialysis needs to be considered on a case-by-case basis. If you feel you have a patient that may benefit from hemodialysis, call your regional hemodialysis center to discuss the case. Hemodialysis offers the most benefit when initiated early, when appropriate, and not thought of as a salvage procedure. 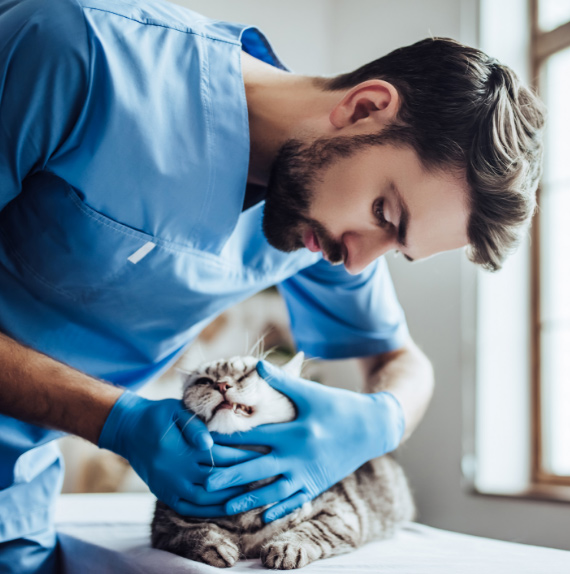 We have over 100 specialty and emergency pet hospitals throughout the country.

Find a Hospital Near Me