Mammary cancer is the most commonly diagnosed tumor in intact female dogs that are older than seven years of age. Male dogs rarely develop such a tumor.

These tumors can be divided into four different groups:

Benign tumors typically do not progress to malignant tumors but cause great concern to the pet owner and veterinarian because they are indistinguishable from malignant tumors. A biopsy of the tumor is the only test that can differentiate which type of tumor is present. In addition, a dog that has multiple mammary tumors may have some that are benign and others that are malignant; therefore, a pathologist must evaluate all masses microscopically.

Mammary gland hyperplasia is a condition in which the mammary glands develop lumps around the time of an intact female dog’s heat cycle. Once the hormone levels associated with the heat cycle dissipate, so do the mammary masses.

Hereditary factors, although important in humans, have not been definitively linked to mammary cancer in dogs. Low risk breeds include the boxers and chihuahuas. High-risk breeds include poodles, English spaniels, English setters, and terriers. Early spaying has shown to dramatically reduce the risk for mammary cancer.

A mass (lump) in the mammary glands is the most common sign of breast cancer. The fourth and fifth mammary glands (glands closest to the groin) are most commonly affected. The mass may be normal color, red or purple, soft, hard, and in some cases ulcerated. The breast tissue, which extends from the front limbs to the hind limbs, over the chest and abdomen, may have multiple masses in different locations.

Inflammatory carcinoma is a type of mammary tumor characterized by a very inflamed, widespread tumor with severe swelling and ulceration of the skin. Secondary swelling of the limbs may also be seen. If mammary cancer has spread, the pet may have lameness due to bone involvement, breathing difficulty due to lung involvement, or other generalized signs, such as weight loss and poor appetite.

A careful evaluation of the patient’s history is made to determine if the dog had recently gone through a heat cycle, had a litter of puppies, or had a recent pseudopregnancy. If this is the case, the masses may resolve in a few weeks with no treatment.

A complete blood count, chemistry profile, and urine testing are done to evaluate the health status of your companion’s internal organs prior to anesthesia and surgery. Chest X-rays and abdominal ultrasound are used to identify visible spread of the cancer; please note that microscopic spread of tumor to other organs cannot be detected with X-rays and ultrasound. The oncologist may recommend a fine needle biopsy of the mammary tumors and any enlarged lymph nodes.

Surgery is an essential treatment for mammary tumors. Generally, one or more mammary gland is removed. If a tumor is found in multiple mammary glands, removal of the entire mammary chain may be recommended.

The tumor and a large zone (2 to 3 cm) of surrounding normal skin, fat and sometimes muscle are removed to reduce the risk of local tumor recurrence. If the tumor is located in fourth and fifth mammary glands, skin flaps from the both flank folds may be needed to reconstruct the large wound following removal of the tumor. 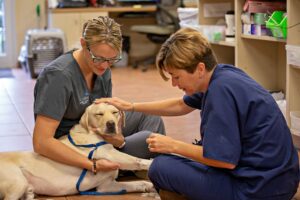 four to five treatments. The treatments are typically done on an outpatient basis and may take a total of 90 minutes to complete each visit.

Unlike humans, most dogs do not lose their hair and usually have only mild side effects from the medication, such as transient loss of appetite and vomiting.

The most important factor that will determine the prognosis is the biopsy report. Tumors that are invasive into adjacent normal tissue, blood vessels, lymph vessels and the lymph nodes carry a poor prognosis.

Ovariohysterectomy, at the time of mammary tumor removal, likely will not improve the survival of the patient. 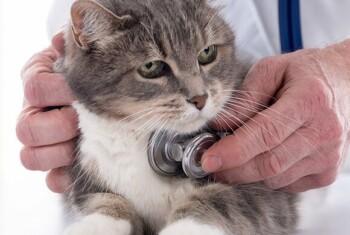 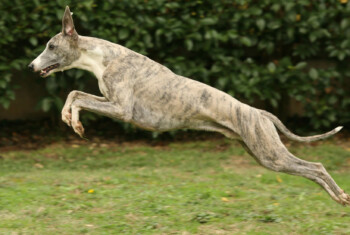 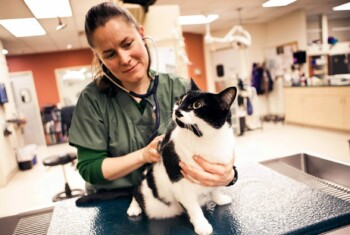