Pancreatitis in Dogs: Cause, Diagnosis and Treatment

The pancreas is a gland within the abdomen located along the stomach and the first part of the small intestine. It performs both endocrine and exocrine functions.

How the Pancreas Functions

The endocrine function of the pancreas includes the production of insulin, which is secreted into the blood in response to carbohydrate and protein ingestion.

The exocrine function involves the secretion of inactive digestive enzymes and bicarbonate into the intestine where they become activated to help break down ingested foodstuffs.

Acute pancreatitis can quickly lead to systemic inflammation, shock and death and must be treated aggressively. Chronic manifestations of pancreatitis include diabetes mellitus (30-40% of dogs with diabetes have pancreatitis) or loss of digestive enzyme production (exocrine pancreatic insufficiency).

Other potential complications include pancreatic pseudocysts and abscesses.

Causes of Pancreatitis in Dogs

The cause of pancreatitis is usually unknown, although these factors have all been associated with its development:

Clinical signs of pancreatitis in dogs usually include some or all of the following:

In severe cases, dogs may be recumbent and in shock.

Diagnostics that may be recommended include:

Currently, the combination of the tests above is usually recommended to obtain a presumptive diagnosis of pancreatitis. The only definitive way to diagnose pancreatitis is to obtain a biopsy via surgery or laparoscopy, although, many times the patient is too unstable to undergo anesthesia. 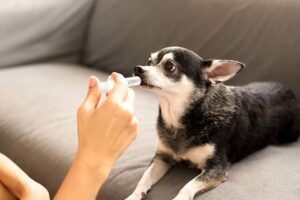 Treatment is truly supportive in nature, and its aggressiveness depends on the severity of the pancreatitis. In severe cases, hospitalization is required for restoration and maintenance of hydration, control of pain and vomiting, nutritional support and possibly antibiotic administration.

If the patient is vomiting, food and water are withheld. Otherwise, an ultra low-fat diet can be offered. The use of very low-fat diets in dogs is to decrease the workload on the pancreas.

In less severe chronic cases, hospitalization may not be required if the patient is hydrated and not vomiting. An extremely low-fat diet will be recommended for home use, as well as regular monitoring of blood work such as the cPLI and/or abdominal ultrasound.

Prognosis is dependent on:

In uncomplicated cases, continuous use of a low-fat diet may prevent any future recurrences of pancreatitis. Conversely, some dogs will experience repeated bouts of pancreatitis, which will progress to chronic pancreatic changes and persistent disease accompanied by unrelenting clinical signs.

Because of the complexity in diagnosis and unpredictability of response to treatment, suggesting a prognosis is difficult. In severe cases, hospitalization may be required for several weeks before the patient is stable enough to be discharged.

For more information on this subject, speak with the veterinarian who’s treating your pet.

Oral Masses in Cats and Dogs