Continuous glucose monitoring can improve the standard of care for diabetic patients.

Current methods of blood glucose (BG) monitoring involve collection of a blood sample from either an ear prick (peripheral sample), phlebotomy, or collection from a central line. These methods have been proven to be accurate; however, each of them is associated with various levels of staff time and resources as well as patient discomfort and blood loss, each time a sample is required. Some point-of-care monitors or Portable Blood Glucose Meters (PBGMs), such as the Alpha-Trak, have minimized these concerns and have been validated for BG measurement in dogs and cats. However, significant improvements with the development and advancement of practical Continuous Glucose Monitors (CGMs) have nearly eliminated many disadvantages of these previous BG monitoring techniques.

Continuous glucose monitors (CGMs) have been around for many years; however, it is only recently that advances in technology have been significant enough to make use of CGMs practical for veterinary patients. A CGM has two parts, a sensor and a monitor. The sensor is temporarily attached to the patient’s skin with an adhesive patch and has a probe that is inserted into the subcutaneous space. The probe is a flexible electro-enzymatic cell covered with a polyurethane membrane. In this probe, glucose reacts with glucose oxidase creating hydrogen peroxide, which is used to generate an electrical signal. This signal is proportional to the amount of glucose in the interstitial space. The sensors are disposable and can last up to 14 days. The monitor is about the size of a PBGM and when placed in close proximity to the sensor, downloads and records the data and displays the current glucose and trends. At the end of the sensor life, the data, which has been collected and saved in the monitor, can be downloaded and viewed in a variety of ways. A smartphone app can be used as a replacement for the monitor with some models.

The glucose reading that is collected by the sensor is not the same as a BG sample, but instead is called a SENSOR glucose (SG) or INTERSTITIAL glucose (IG) reading. In humans, SG has been shown to correlate well with BG. However, it is important to note that an SG reading will lag behind BG slightly in both time and amplitude. This occurs because glucose is moving down along its concentration gradient from blood to interstitial space to cell to mitochondria. Despite this lag, SG readings are sufficiently accurate to guide most clinical decisions.

New CGMs are quite small (a little larger than a silver dollar) and take readings every minute (over 1400 readings per day), have data that is available in real time, do not require calibration and can start reading within one hour. CGMs also use significantly fewer resources (needles, strips, syringes, etc.) and less personnel time. Finally, these devices have nearly eliminated the concerns of patient stress, restraint, discomfort and blood loss from repeated blood collection.

Looking at the Data

There is not a lot of data on the use of CGMs in veterinary medicine; however, the studies that have been performed demonstrate that CGMs collect clinically relevant values, detect hyper- and hypoglycemia and have very few adverse effects. The ideal site for placement has been investigated but has not necessarily been optimized in veterinary patients; often the paraspinal regions are used.

CGMs have a variety of clinical indications; most of which include patients with diabetes mellitus (DM), either as a monitoring tool or to optimize insulin dose, but also in patients suffering complications of DM, such as diabetic ketoacidosis (DKA), hyperosmolar non-ketotic states and hypoglycemia. CGMs may be considered in patients with hypoglycemia for a variety of other reasons: hepatic disease, sepsis, toxins and neoplasia, such as insulinoma, but use in those diseases has not been reported.

One study in dogs demonstrated that CGMs detected hyper- and hypoglycemia, which was not identified using a PBGM; this may indicate superiority of CGMs over PBGMs in some instances. In another study, CGMs have demonstrated very high accuracy of glucose compared to a PBGM, and although there is some variability in SG readings associated with patient hydration, these variations were not associated with body condition, perfusion or degree of ketosis.

The CGM that the author has had the most success with is the Freestyle Libre 14 made by Abbott. CGMs are useful but are not infallible. Approximately 10-20% of sensors, when applied to a veterinary patient, do not function properly and/or may not work for the entire 14-day period. There are a variety of reasons for device failure, but ultimately applying technology to biology is often fraught with complications, and these sensors were designed for human, not animal, use; the differences of skin and subcutaneous tissues between humans and veterinary patients make application of these devices imperfect. Other reasons for failure may include patient movement or dislodgement, adhesive failure, insufficient interstitial space and other biocompatibility issues. Device failure is an important aspect to discuss with clients to help provide realistic expectations and avoid frustration.

The future of diabetic management is bright. These new sensors have provided significant advantages and there may be more to come with the next generation of technology. Some of the next steps are currently being performed in human patients. For example, implantable CGMs, which have a longer lifespan, are already available. Pairing CGMs with insulin pumps has started to occur, and development of an artificial endocrine pancreas is also underway. While tight glucose control as is desired in people may not necessarily be a goal in our veterinary patients, these devices certainly provide a means of improving the standard of care for management of our diabetic patients.

As seen below, new CGMs can be used with both dogs and cats and help eliminate patient stress and discomfort. 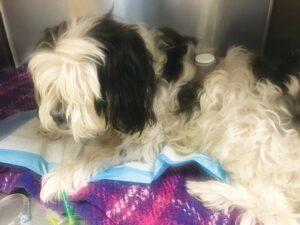 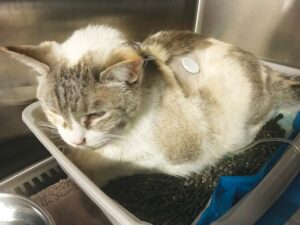