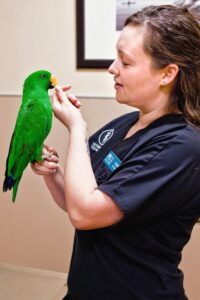 In the late 1970s, this disease was termed “macaw wasting disease” and seemed to be limited to macaws.

However, since it was initially described, it has occurred in over 50 other species of psittacine birds.

This disease affects the nerves, primarily of the gastrointestinal tract, but may also affect the nervous system directly, causing neurologic signs. Parrots of all species and ages can be infected.

The most common clinical signs of PDD include weight loss, a possible initial increase in appetite, regurgitation, weakness and passage of undigested seeds or other food in the feces. Neurologic signs may also occur, including loss of balance, circling, partial paralysis, and seizures; although, this presentation is somewhat less common and usually occurs in Old World species such as cockatoos and African grey parrots.

The cause of PDD involves a bornavirus.

Routine blood work will not conclusively diagnose this disease, but it is useful in indicating the likelihood of the presence of PDD, and in ruling out other diseases. Radiographs (X-rays) are the most immediately useful diagnostic tool, and often demonstrate the classic severe dilatation of the proventriculus (true stomach). Specific tests, including DNA and antibody tests from blood samples, have been developed and show promise.

Biopsies of affected tissue can often demonstrate the presence of this disease. However, many patients with PDD are debilitated, and the surgery needed for an internal biopsy can be risky. Also, healing is greatly impaired in the presence of this disease, adding further concern to the performance of any surgical procedure. If a biopsy is performed, the crop is often chosen since the surgery and recovery are less debilitating to the patient.

The disease may occur in one individual or may affect multiple birds in an aviary or household. The majority of  diseased birds will die within several months to a year after developing clinical signs; although, earlier detection and treatment are improving the prognosis. Recent use of both modified diets and certain anti-inflammatory medications (cox-2 inhibitors) has prolonged the life of many birds, and shows promise for controlling the disease in some individuals. Not all birds that are exposed develop the disease.

In an aviary or multiple bird household, if a bird is diagnosed with this disease, physical separation and increased ventilation often prevent the spread to other birds. Prevention is dependent on proper hygiene and separation of affected birds from others in the collection.