We brought Drake, our seven-year-old red lab, to BluePearl in Eden Prairie last September desperate for answers as to why he was suddenly sick and losing weight. After some testing, we found out his white blood count and globulin levels were extremely elevated. With multiple x-rays and an ultrasound, a mass was discovered by his spleen. We assumed they had found cancer. From there, we decided to take Drake home before deciding our next steps.

The Hardest Decision We’ve Had to Make

The following day, we decided to bring him back to BluePearl. The findings were consistent from the day prior, but he had additional fluid built up in his abdomen. Our doctor told us he had 24 hours to live in his present state.

With our options of either undergoing surgery or euthanizing, we decided to say a prayer and opt for surgery. To date, this has been the hardest decision we have had to make knowing that if the mass was a malignant tumor, not only would we be putting Drake down a few days after, we would also cause his last precious days to be his most painful and miserable.

The next day Dr. Carly Campbell performed an exploratory surgery on Drake. Over the two-hour-long surgery, she found multiple encapsulated pieces of gauze that were left over in Drake’s abdomen from his neuter surgery (he was neutered six years prior due to being cryptorchid and the surgery was required to be done abdominally). The doctor also needed to remove his spleen and part of his intestine from the damage the gauze left.

Drake stayed with BluePearl for five days after surgery, and we were updated daily with his status as well as pictures of him. 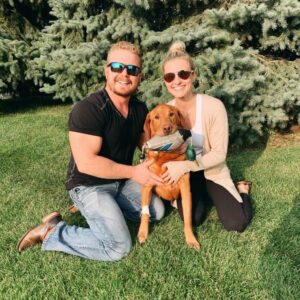 Taking Each Day in Stride

If it weren’t for Dr. Campbell and the rest of the team at BluePearl in Eden Prairie, Drake wouldn’t be here today. Because of them, Drake made a full recovery and is just as energetic, fun-loving, and takes each day in stride. It warms our hearts that BluePearl was there for Drake and us during our most needed time. Thank you BluePearl, Dr. Campbell, and the entire staff for saving our sweet boy.

Crossing Over the Rainbow Bridge

Gratitude After a Thanksgiving Emergency

Experience is the Best Teacher (and Lifesaver)

When You Don’t Know What’s Wrong