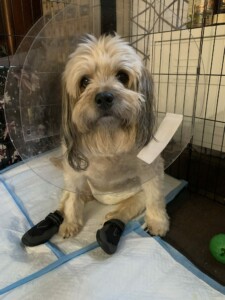 Even the most skilled veterinary care can require rehabilitation and attentive home care to support a pet’s full recovery. Take for instance, Pickles, a seven-year-old Wheaton Terrier mix, who came into BluePearl Sandy Springs last November with pain and paralysis in one of his legs.

In the fall of 2021, Amanda Tenedini, owner of Pickles, noticed that Pickles’ tail was drooping. Alarmed, as he usually walked with his tail upward and wrapped behind him, Amanda rushed him to her local veterinarian for examination.

I took him to the vet, and they did tests to see if he had reflexes in his legs. They determined that he had some sort of pinched nerve,” Amanda explained. “We put him on medicine and made him rest, but after some time, he had another episode. We tried the medicine again, but this time, it did not work, and he started stumbling and knuckling. I knew I had to get him in to see an emergency vet the moment that happened. By the time I arrived at BluePearl, which is about 30 to 40 minutes away, Pickles had completely lost his ability to walk. It is the hardest thing in the world to see that happen so quickly.”

Pickles’ expert care team at BluePearl Sandy Springs consisted of Jennifer Parkes, DVM, DACVIM, Nicole Block, DVM, Resident in Neurology, Nicole Kelly, Veterinary Assistant in Neurology, and Ariel Colman, RVT. After testing and advanced spinal imaging, Pickles was diagnosed with intervertebral disc disease. Intervertebral disc disease is a common condition characterized by the breakdown (degeneration) of one or more of the discs that separate the bones of the spine (vertebrae). Upon review, Pickles’ spinal MRI showed an acute (sudden) herniated disc in his lumbar spine – the lower back where the ribs end and the lower back begins. The MRI also showed that Pickles had a chronic herniated disc further down his back, and that material from these herniated discs was putting pressure on his spinal cord.

Pickles had an acute herniated disc that we typically see in smaller breeds or what we call chondrodystrophy breeds, which include dogs like Dachshunds or French bulldogs. But any dog can suffer from a herniated disc, and I think Pickles is a great example of that,” said Dr. Block. “Herniated discs are typically a degenerative condition, so there is little owners can do to prevent this from happening. Over time, the disc undergoes degeneration that causes an inner gelatinous material to move out of place which can lead to spinal cord compression. Typically, with an acute herniated disc, there’s about a 90% chance of full recovery with aggressive surgery, physical therapy, and rehabilitation, if the pet can still feel their toes. Pickles was one who, even though paralyzed in the one leg, could feel that leg very well. A more conservative route, like the sole use of medication, would potentially be worse in terms of outcome due to the compressive disk material sitting in there.”

Herniated discs in dogs can cause bruising of the spinal cord, decrease blood flow to that area, and bring about signs of weakness, pain, dragging of the legs, or in more advanced cases, paralysis with no pain sensation or feeling of the toes. According to Dr. Parkes, intervertebral disc disease is one of the most common spinal diseases or injuries that they see.

Intervertebral disc disease is something that we pretty much see cases of every day. Most commonly, the best treatment course that gives you the most predictable chance of success is with surgery. And so that’s what we spoke with Pickle’s owner about,” said Jennifer Parkes. “Although most dogs fortunately do well, moving forward with open spinal surgery is a big decision; it is a big surgery. And there’s a lot to think about with recovery, and financially, so, we had a long discussion about that. Ultimately, Amanda chose to go forward with surgery for Pickles.”

Drs. Block and Parkes performed spinal surgery on Pickles and were able to remove a large amount of the acute compressive disk material out from his spinal canal. After a successful surgery, Pickles then spent the next few days in the ICU recovering. Overall, Pickles spent about a week or two with the BluePearl Sandy Springs team, who collaboratively began his post-operative care.

We usually keep patients for about two to three days in hospital, but Pickles was in the hospital for about a week or two. Larger dogs sometimes have a bigger recovery in terms of bladder care, comfort, and physical therapy,” Dr. Block explained. “And then when he did go home, his owner, Amanda, would email us or call us to ensure that he was well taken care of and on the right track of healing.”

When Pickles returned home, Amanda continued to reach out to his care team and had many conversations with the neurology department about his ability to urinate on his own and general care. According to Amanda, caring for a dog post-operatively, who was still temporarily paralyzed, was both challenging and terrifying.

It was pretty overwhelming. I did not know if I was going to hurt him or if he was in pain. And I had to learn the scheduling of medicine and how to use a sling to take him out,” said Amanda. “I had to bring him back in for an emergency visit because he was struggling in the beginning with some pain and personality issues…being a very stubborn dog and not really wanting me to handle him or clean him. I’m just really grateful for the neurology team at BluePearl because they handled a lot of my neurotic dog mom moments where I was calling and emailing them with almost daily questions and concerns and videos. Once he had his staples out, though, he was feeling somewhat better. That’s when we started bringing him to rehab, and that was where the biggest change happened, shortly after he began rehab.”

To get the best and fastest recovery, maximize mobility and comfort, rehabilitation is often necessary. Rehabilitation helps guide the pet’s recovery and helps owners with their at home care as they frequently get one-on-one attention with a rehabilitation therapist. This time allows the owners to learn best practices and obtain answers to any questions they may have. With Pickles, Amanda was able to do many of the assigned rehabilitation protocols at home with training and homework from the expert team at Georgia Veterinary Rehabilitation.

Georgia Veterinary Rehabilitation was a great place for Pickles to start doing some water rehab, acupuncture, a laser therapy, and some other rehab care. And they were so patient with him and did their best to really get an understanding of where he was at the time and what sort of pain he was in,” said Amanda.

We were able to start acupuncture on him to help with neuro-function to get his brain to start to connect with his feet again. We also used laser therapy to help with pain control. Then, we started doing more rehab therapy protocols to work on retraining him… how to have a normal gait pattern, working on neurologic function, and getting his brain to recognize sensation in his toes,” said Dr. Coplon. “We then started doing balance work and getting him to be able to hold him himself up; support himself doing functional movement like being able to get up from laying down, or from a seated position to a standing position. Amanda was also very helpful, and happy to bring him in and work with him at home. It’s just like any homework. The more you do it, the more they’re going to get from it.”

Today, Pickles is still on his journey to recovery but, according to Amanda, is thriving again, happy, and wagging his tail for the first time in several weeks.

Initially, he didn’t wag his tail and he didn’t even look happy to see me because he knew that when I came over, I was either giving him medicine or cleaning him up because he had an accident. But now, he’s this happy dog again, wagging his tail, coming over to see me,” Amanda said with joy. “The first time he walked across the room, I was eating a quiche for breakfast. I just burst into tears because I was so proud of him. It’s been very emotional to see him go from so helpless to so strong and just happy again. It’s so nice to see my boy thriving.”

Thanks to the collaboration and communication across teams at BluePearl Sandy Springs and Georgia Veterinary Rehabilitation, and the dedication of Pickles’ owner, Amanda, Pickles is almost back to his old self. While recovery timelines can vary, it is the quality of care that makes all the difference, and Pickles’ story is a prime example of this.