Stomach cancer may not be one of the most common types of canine cancer, but it can be one of the most devastating. This cruel disease often shows no symptoms until it has already reached advanced stages and is more commonly seen in older dogs.

The cause of stomach cancer in dogs is generally unknown, but there are some associated risk factors, including age, sex and breed. Both benign and malignant stomach tumors are more common in older dogs, particularly males around 9 years of age.

Breeds known to be more at risk of developing stomach cancer include:

Types of Stomach Tumors in Dogs

There are a few different types of tumors that can grow within a dog’s stomach. These may be benign (non-cancerous) or malignant (cancerous) with chances of spreading to other parts of the body. When left untreated, both can continue to grow and interfere with stomach function, while also increasing the risk of tumor ulceration and gastric obstruction.

Cases involving ulcerating tumors also run the risk of developing a stomach perforation, or a hole in the stomach, which can lead to a dangerous, sometimes life-threatening condition known as peritonitis.

Unfortunately, the majority of stomach tumors in dogs are diagnosed as malignant. The most common, gastric adenocarcinomas, originate in the lining of internal organs and can invade different parts of the digestive tract.

Less common malignant tumors include leiomyosarcomas, which form on the muscles lining the stomach and intestines, and lymphomas – also known as alimentary or gastrointestinal lymphomas, which develop in immune system cells known as lymphocytes.

Benign stomach tumors are less commonly diagnosed in dogs. However, they also run the risk of interfering with stomach function as they continue to grow.

Another type of tumor that can develop in a dog’s stomach involves mast cells. These are normal cells found in most organs and tissues of the body that serve the immune system and allergic response. They are the cells responsible for fighting harmful pathogens, such as viruses and parasites.

A mast cell tumor (MCT) consists of a group of mast cells that commonly form as a mass on the skin, but can also grow in other parts of the body, including the stomach. In dogs, mast cell tumors are more commonly diagnosed as benign and are easily treatable with surgery, but they can be more aggressive in some cases and spread to other parts. 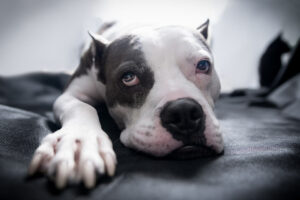 Symptoms of stomach cancer in dogs usually develop gradually over weeks or months, with vomiting being the most common. This is often the first sign and it may appear blood-tinged or resemble coffee grounds as the condition progresses. This is due to ulcerating tumors, or tumors that break open and bleed. Black stools are also an indication of an ulcerated stomach tumor.

While your dog may not be able to tell you he’s in pain, there are some signs you can watch for, including:

Diagnosing canine stomach cancer involves a physical examination, along with a review of the dog’s medical history for any reports of chronic vomiting, lack of appetite and weight loss.

The examination may also include diagnostic imaging, which involves giving the dog an oral dose of a radiographic contrast agent followed by an X-ray. The contrast agent consists of a non-absorbing material that works by coating the digestive tract, so the veterinarian can get a better visual of diseased areas.

Another nonsurgical procedure that may be used to examine the dog’s digestive tract is an endoscopy, which involves feeding a video camera attached to a flexible tube in through the mouth and down into the stomach. If a tumor is found, a biopsy is needed to confirm the diagnosis, which can be done at the time of the endoscopic evaluation.

Additional testing done prior to surgery may include a complete blood count, blood chemistry profile and urinalysis to check internal organ health. Chest x-rays and abdominal ultrasound can be used to identify the visible spread of the cancer. However, the microscopic spread of cancer to other organs cannot be detected with X-ray or ultrasound. 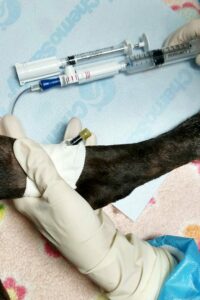 Treatments for canine stomach cancer may involve surgery, chemotherapy, radiation, or a combination of treatments.

Surgery is often recommended as the first course of treatment for removing tumors associated with stomach cancer in dogs. These tumors are commonly located in the lower part of the stomach.

After surgery, most patients remain in the hospital for two nights. During this time, the dog is monitored for any complications and receives additional treatments, including intravenous fluid therapy and antibiotics. An anti-vomiting medication may also be given if needed.

Depending on the type of tumor and its location, further treatment may be recommended.

If your dog’s stomach tumor is malignant with the possibility of spread to other parts of the body, chemotherapy may be recommended as the best course for treatment either with or without surgery. This medication is administered every two to three weeks via intravenous injection by a veterinary oncologist for a total of four to five treatments.

Typically done on an outpatient basis, chemotherapy treatment may take a total of 90 minutes to complete each visit. Unlike humans, most dogs do not lose their hair and only experience mild side effects from the medication, such as loss of appetite and brief bouts of vomiting.

Radiation therapy may be recommended for localized tumors that cannot be surgically removed. This is a painless procedure that is done under sedation to prevent the dog from moving. Common side effects may include fatigue, skin issues and some discomfort in the area.

Radiation therapy is often performed daily for about three to four weeks. However, the number of treatments and frequency may vary depending on the type of cancer and severity.

Unfortunately, the prognosis for dogs diagnosed with malignant stomach tumors is not positive, as in most cases, the cancer has already progressed to advanced stages.

The most common tumor, gastric adenocarcinoma, carries a guarded prognosis as the cancer has often already begun to metastasize (spread to other parts) at the time of diagnosis. Overall survival times are commonly less than 6 months, with the possibility of the tumors growing back after treatment.

Dogs with gastric leiomyosarcoma can potentially be cured with surgery alone, but survival rates are similar to those of gastric adenocarcinoma when diagnosed in the advanced stages.

Just like with humans, early detection is key to treating cancer in pets. In this article, BluePearl Veterinary Oncologist Dr. Joshua Lachowicz provides tips for recognizing the warning signs of cancer in pets and the steps you can follow to reduce the risk. 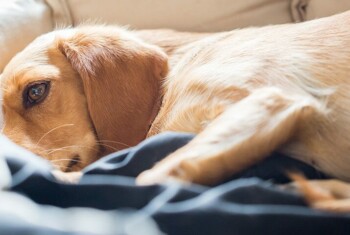 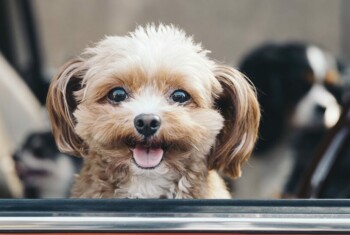